Enemies of the Enlightenment: The French Counter-Enlightenment and the Making of Modernity 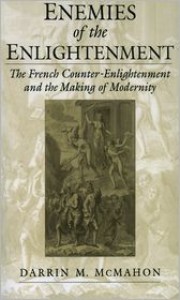 My initial impression of this book was slightly negative. It appears to be a dissertation turned into a tenure book, and it has, as such, the flaws of the genre: too many examples, a bit stilted, a certain superficiality and glibness. All that remains, and it costs the book a star. But that said, this is still a valuable and interesting piece of work.

The rhetoric of these ‘anti-philosophes’ was developed largely as a *religious* reaction against the desacralization of the state and of society. It lay, in other words, not in a social or political critique, but in an idealistic/religious one. The Revolution, itself, was then seen by these writers as confirmation of their worst fears – of what would happen if the world adopted the (godless) values of the Enlightenment; and these Counter-Enlightenment views then formed the basis of the Ultra-Royalist reaction of the Restoration (1815-1830). By then, ‘les philosophes’ had been replaced (as target) with “liberals” – which was the term used to describe the Independents -- that is, the moderates around Lafayette during the reign of Louis XVIII. But while the target was ‘modernized’, the rhetoric and critique was essentially unchanged. This rhetoric was laced, moreover, with an astounding vitriol (quelle surprise!!), derived from an essentially Manichean worldview that saw the forces of tradition arrayed in a good vs. evil ‘struggle unto death’ against the forces of secularization – an apocalyptic struggle that would brook no compromise – by a vitriol that survives on the Right into the modern era.

But as the tradition they defended, though clearly a form of “integral absolutism” (the indivisible unity of throne and altar) was a thoroughly *idealized* tradition, a tradition that never actually existed, McMahon argues, convincingly (in my opinion), that these ‘traditionalists’ were, in fact, revolutionaries (not conservatives), idealists (see above), and radicals (not real traditionalists). That is, the origins of the European Right, the contemporary European Right, lie not in some medieval or early modern conservatism (Burke), but in a very modern reaction or rebellion, aggressive and revolutionary, against the rationalism and secularism of the equally modern Enlightenment.

All this, moreover, backed with copious examples from contemporary sources and with abundant references to the secondary literature. So the author makes quite an impressive case for his position. It is a position, indeed, with which I have much sympathy, and which is also broadly consonant with the views of Zeev Sternhell, who likewise argued (in a controversial series of books, the best of which imo is this one:
http://www.goodreads.com/book/show/1087244.The_Birth_of_Fascist_Ideology)
that the ideological and intellectual roots of fascism lay not in Germany or in Italy, but in the integral and increasingly nationalist Right of 19th cen. France.

But there is still a bit more here, because McMahon is ultimately offering up a defense of the Enlightenment as such -- and not only against the reactionary critics of the Right (18th cen. and later), but also (in brief asides found in the introduction and conclusion) against leftwing postmodernist critics, from Horkheimer to Lyotard to Foucault. It is a defense of the rational, secular, individualism of the Enlightenment, offered from a historical vantage point, that is broadly consonant (to use that phrase again) with that offered (on more philosophical grounds, or rather, from the vantage point of the *history* of ideas) by Richard Wolin in his very interesting The Seduction of Unreason -- another book, not entirely flawless, but well worth the read:
http://www.goodreads.com/book/show/349784.The_Seduction_of_Unreason

McMahon’s book, finally, can be read fairly quickly because one can, for the most part, simply read the first sentence of every paragraph and thus skim along like a rock over a pond.