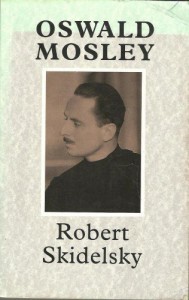 I am sure that those with a deep interest in Interwar British politics will find this required reading. But others might find it rather tough going. That is surprising, given the interest I found in reading his book on Keynes, which is brilliant. This one, however, is earlier. In general terms, Skidelsky tries to somewhat rehabilitate Mosley by showing the context that led him to abandon Labour for fascism. Skidelsky's point is that it was not mere opportunism, but grew out of a radical disenchantment with the failure of the 1929-1931 Labour Govt, and was part of the zeitgeist. In this, he is no doubt successful -- as I see Judt, in his conversations with Snyder, essentially adopting this same standpoint about Mosley. On the other hand, the fact remains that Mosley and the several of the Mitford girls were either Nazi sympathizers or out-and-out Nazis -- and Skidelsky, in the portions I read, fails to engage that at all adequately.