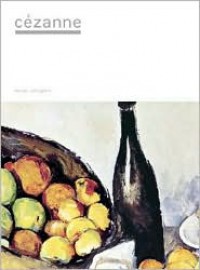 [It was good finally to finish this. Parts of it were difficult to read, as S.'s prose tends at times to be over-wrought. There are other pages that show signs of true genius. I haven't much to add to what I've already written below.:]

Where the Impressionists were concerned with light, and atmosphere… and with impressions, of course…, Cézanne was an artist of construction. As such, though he had no great interest in 'theory', he was a far more intellectual (and cerebral) a painter than, say, Monet. Consider…

As in many of his works, Cézanne was preoccupied here with the interplay between horizontal and vertical. There is much going on in this painting. The artificial (house) is contrast with the organic (mountains), as warm and cool…. But while one is struck immediately by the horizontals -- of the mountains, of the road…, and the bands of color…, there is nonetheless a subtle curving vertical very much in play, if one simply follows the line of the door to the window above it… to the chimney, the tree (that seems to be growing out of the chimney), to the puff of white in the mountains just above that tree…. To gain this effect, Cézanne had to depict a house whose windows were quite off-center…. But the lopsided view is barely noticed -- as the over-riding harmonies obscure it.

The opposite -- a stark vertical, in front of more subtle horizontals, can be seen here

It took me awhile to understand this difficult painting. Far more haunting and beautiful, perhaps, is the Chestnut Trees at the Jas de Bouffan (1885-1887) at the Minneapolis Institute of Art

Here the two rows of verticals rise up to the winter sky, each trunk of different sizes… their branches curling up and outwards like an arabesque or a Gothic vault (as Schapiro sees it), while the horizontals are provided by the bands of color, the old medieval wall…, and the mountain hill, achingly out of reach beyond the trees…

One last -- the same scene as the Mont Sainte-Victoire above, but this time the artist is sitting just BESIDE the tall tree. Notice the horizontal flows of the mountain and the land beneath it, "built up in broad layers intricately fitted and interlocked, without an apparent constructive scheme"…, and "the dialogue of the great gesticulating fronds from adjoining trees that cannot meet…". It is a painting that for all its serenity, is turbulent, "traversed by restless forms".

There is much more in this volume, but I hope this gives a flavor of it -- Cézanne is a painter that requires some study and a more practiced eye -- but I am at least beginning to understand why he was such a god-like presence for the early modernists like Picasso and Braque and Derain...

Meyer Schapiro is alleged to have been a genius. Though he did not publish extensively, those who knew him personally or took courses with him at Columbia testify to his remarkable classroom presence. This book contains an introduction plus plates with commentary. The first six or seven plates are out of chronological sequence and in black-and-white, though the commentary refers to the color plays. Something has gone wrong at the editor's table.

Schapiro's prose is somewhat idiosyncratic and there are passages I do not understand. Partially, it is because he talks about color, and I do not understand anything about color. Like many writers on art, moreover, he uses adjectives -- as if they were meaningful (whereas I had been taught to write without any adjectives -- they were all to be evacuated from the arena of my prose...). But when I do understand it, the commentary is illuminating. And there is something about Cezanne that is more than Manet or Monet or (to say the least!) Renoir...}}
Tweet