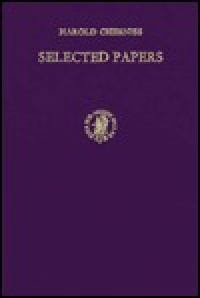 I know most of these papers intimately. Harold Cherniss was the greatest student of ancient philosophy (bar none) in the modern era -- that is, going back to Schleiermarcher: http://en.wikipedia.org/wiki/Friedrich_Schleiermacher

and with
The Characteristics and Effects of Presocratic Philosophy
(which is a very brief summation of
http://www.amazon.com/Aristotles-criticism-presocratic-philosophy-Cherniss/dp/0374914826/ref=sr_1_2?s=books&ie=UTF8&qid=1315159349&sr=1-2

This latter book, unfortunately, is very hard reading. But the book on Aristotle's Criticism of the Academy (also not an easy read, to be sure) is the single book on Plato and Aristotle that any serious student of the topic should read. I would still start with Riddle of the Early Academy, however.

Cherniss is the sort of scholar where one needs to know a lot about the topic to fully appreciate.

Cherniss was a student of Roger Miller Jones, who was himself a student of Paul Shorey, and Cherniss is Shorey's greatest follow. What I say above about Cherniss holds almost as true for Paul Shorey.

Many of these papers also are of great importance.

In addition to Cherniss and Shorey, and Tarán - I would also recommend reading the papers (most on the Presocratics) of William Arthur Heidel.

These scholars are not as well known as the Vlastos' or (worse) the Straussians of this world -- but they have the small advantage (over these) of actually having understood their topic. Needless to say, that is not a surefire way in this world to gain a large following.... the Many, as Plato himself would say, being profoundly dumb.
Tweet