The World in Depression, 1929-1939: Revised and Enlarged Edition (History of the World Economy in the Twentieth Century) 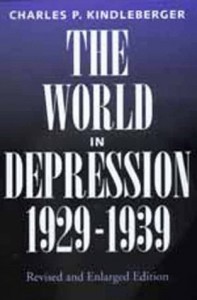 (I have not in fact finished this book, but do not expect to return to it anytime soon.)

The book is not as long (300 pgs) or as difficult (though it is dense enough) as I had remembered -- which, I suppose, says that I have learned a lot in the interval --. It is an outstanding book: lucid, intelligent, honest to a fault... and has none of the turgid academese usually found in books like this.

Kindleberger's discussion covers the whole of the Great Depression -- starting with the recovery after WWI, and running right up to the rearmament in 1938/1939. As I have not yet read far, I will restrict myself to just a couple of comments.

Most of the people writing now on the Depression (bloggers, for example) simply refer to three phases or crises: the Crash (1929-1930); the European financial crisis of 1931; the U.S. banking crisis of 1933.

In general, the more I read about Herbert Hoover, the more admiration I have for him -- he was a remarkable man -- but was man who simply could not see sufficiently beyond the circle of orthodoxy to deal with the economic cataclysm. Roosevelt, though he knew little about economics, had an element of genius…, and could.

Secondly, Kindleberger's view of the events of 1931 -- which was the central crisis - are very close to what we are getting from Martin Wolf now on the current situation with Germany and Greece. K.'s view (like Wolf's) is that policy makers blundered by treating as a zero-sum game (beggar-thy-neighbor) what is not, in fact, a zero-sum game (international monetary and financial and trade relations). Thus, the disaster of that year was due to policy blunders -- that is, to intellectual errors -- not to an (unleashed) force of nature (Greenspan). The Crash of 1929 is somewhat different, of course -- as there it is a question of a debt-bubble that had been allowed to form.
(see http://www.ft.com/comment/columnists/martinwolf; esp. March 18th & 23rd)

Third, and finally -- K. supports the contention I've been making that reparations were NOT the cause of hyperinflation or of the Depression -- since, as I have said, Germany barely paid any reparations. So I can add Kindleberger to the following list: Bresciani-Turroni, Jens Parssons, MacGregor Knox.

However, Kindleberger does argue -- and Lords of Finance brings out this point, as well -- that the issue of reparations and war debts (with which it was so intimately bound) so distorted the questions of the day, political, currency, trade, etc. -- that while it in no way 'caused' the Depression, it must constantly be borne in mind.

An interesting example he gives: Part of the Dawes plan of 1924 was to float Germany an 800 million (Renten) Mark loan -- to help pay for the reparations they owed to France (who owed money to Great Britain who owed money to Washington that the Americans would not forgive....) - of which $110 million was done in NY. The loan was oversubscribed 10 to 1 -- which set off, in NY, a mania of foreign lending -- not only to Germany, but to Latin America (the so-called 'Dance of the Millions'….). Ultimately, by 1930, the default rate had gone from 18% to 50%… The Americans, who had just come upon the global financial stage -- had all the enthusiasm and hybris of youth and new found (financial) power, but none of the experience nor restraint needed to avoid the speculative bubble that followed. Thus, the impact of reparations was very real, but it was indirect.

{{I think it's time once again for me to start this long (and difficult) book. Events in the euro are showing how easily things can unravel... because of human error and through violent moves in currency blocks. It was Europe, of course, in 1931 that caused the second leg down in the Great Depression -- as Germany began to fail -- and which caused a contagion.... leading to the failure of the Credit-Antstalt in Austria.

I doubt very much that Merkel will allow things to get to that point -- but you never know... and that in itself is troubling, as it shows how much is riding -- not on vast historical forces -- but on the decisions of mere (and fallible) mortals... on mere wisps...

These are two really quite remarkable articles....

European Central Bank President Jean-Claude Trichet jumped into the growing fray over Greece's debt crisis, suggesting the country could receive loans from its euro-zone partners under certain conditions—a position that appears to put him at odds with Germany, which is pushing for the International Monetary Fund to play a central role in any rescue.

Mr. Trichet's comments, in testimony Monday to the European Parliament, came as doubts over Europe's commitment to helping Greece weighed on the euro and drove up Greece's borrowing costs. He also took aim at the deepening divisions between European governments and institutions ahead of this week's European Union summit—effectively telling them to get their stories straight on Greece and to stick to them.

"Verbal discipline is of utmost importance," he said. "I would prefer that different institutions think first and then express their opinions as clearly as possible."

Loans to Greece from other euro-zone nations are a possibility, Mr. Trichet suggested, as long as they don't "mix up" a transfer or subsidy that would give Athens financing advantages. "We can only be talking about a loan without any sort of subsidy elements. That needs to be clear," Mr. Trichet said. As a precondition for such a loan, the "extraordinary situation" has to threaten the euro zone as a whole, and not just an individual country, he said.

French Minister Lagarde on Greece (03/12/10)
Greece On The Brink: Civil Servants Fight Back (03/11/10)
AM Report: Cracking Down on Swaps (03/10/10)
German Chancellor Says Greece Doesn't Need Aid (03/06/10)
Many euro members fear that IMF involvement in a potential bailout would undermine confidence in the single currency. But in Germany, the euro zone's largest economy, the government faces strong domestic resistance from voters and lawmakers to footing a large bill for bailouts of euro members that have pursued loose spending policies in recent years.

Germany on Monday continued to distance itself from the ECB and Germany's own national central bank, the Bundesbank, which also argues against IMF financial assistance to Greece.


"I say this very explicitly, in my opinion [help from:] the IMF is a subject that we need to consider and that we must continue to discuss," German Chancellor Angela Merkel said. Ms. Merkel repeated that European Union leaders won't decide on an aid package for Greece at their summit in Brussels on Thursday and Friday.

Meanwhile, European Commission President Jose Manuel Barroso said in Monday's editions of Germany's Handelsblatt newspaper that he wants EU leaders to agree on a system of coordinated credit for Greece at this week's summit.

Euro-zone governments will intervene to help Greece only as a last resort if the bloc's stability is threatened, Ms. Merkel's spokesman Ulrich Wilhelm said. In that scenario Germany would be open to financial assistance by the IMF, he said, hinting at a potential joint aid package involving the IMF and euro-zone governments.

European policy makers' divisions put pressure on the euro Monday. It briefly sank to a three-week low of less than $1.35 after Greece's deputy prime minister Theodore Pangalos said the euro would "have no meaning" if Athens is left unprotected in the face of market speculation against its government debt. It later recovered as higher U.S. equities spurred greater risk-taking by investors. Still, the risk premium Greece must pay on its debt rose, with the 10-year bond yield spread over safer German bonds rising about 0.10 percentage point to 3.35 points. The cost of insuring Greek sovereign debt against default using credit-default swaps also rose.

Calling speculation against the Greek bond market a "despicable" game, Mr. Pangalos said the German government was implicitly allowing German banks to attack a fellow euro-zone member. "Some people in Germany are making money," he said.

Greece's central bank added to the pressure, saying the nation's gross domestic product will contract by 2% this year, a bigger drop than the finance ministry expects. A deeper-than-expected recession would make it even harder to achieve the ambitious deficit reduction Athens has promised. Greece's deficit was 12.9% of GDP last year, the central bank said, even higher than the government's previous 12.7% estimate. The country faces a "vicious circle" as it tries to repair its finances, as budget cuts will compound the recession, the central bank said.

Mr. Trichet offered some verbal support to Greece, calling its steps to rein in its deficit "courageous" and saying they should bring down borrowing costs. He also strongly hinted that its debt would still be acceptable as collateral for cheap ECB loans even if credit ratings agencies cut Greece's rating, provided Greece reduces its deficit as promised. Under current relaxed rules introduced during the global financial crisis, Greek debt's eligibility as collateral at the ECB isn't in danger. But under pre-crisis rules to be reinstated next year, further credit-ratings downgrades could render Greek debt ineligible.

Mr. Trichet said he expects financial markets to "progressively realize" that Greece's fiscal measures are "convincing," and "if it would appear that this working assumption is too optimistic...then we will look at the situation."

Mr. Trichet, one of the architects of Europe's common currency, also moved to quell talk that countries could face expulsion from the euro zone, an idea he has repeatedly called "absurd."

"The euro area is not a la carte," Mr. Trichet said. "We share a common destiny."