The Idea of Progress in Classical Antiquity 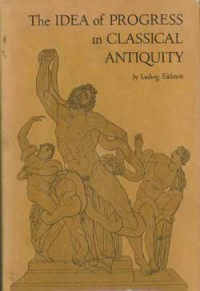 This book is an important corrective to Bury, who (though himself an ancient historian) missed much of the relevant evidence from Antiquity. The idea of progress first appears, in fact, in Xenophanes fr. 18, and was well-known to the Sophists and in the Hellenistic period.

Edelstein, who was at Hopkins for many years, was one of the great scholars of ancient thought. He wrote extensively on ancient medicine; his papers on various topics in ancient medicine and philosophy are often of major importance; and his book on Plato's Seventh Letter (proving that the Letter is spurious, and that therefore all the inferences drawn from it are of no value) is a model of scholarship and judgment.
Tweet