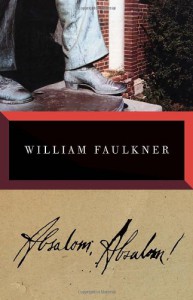 Rereading this was definitely the right decision. On a second reading, a book that had been knotty and confusing, became crystal clear -- perfectly constructed... as Faulkner proved actually to be holding all of the threads firmly within in his hands.

The book IS constructed like an onion, with Faulkner skillfully pulling apart layer by layer (-- all the passages about Quentin and Shreeve around the table are mere narrative interludes, intended merely to allow the reader to regather himself before beginning the assault on the next section, and should be read as such --) with its remarkable turnaround, a peripeteia of character more than of plot!, and its chilling and profound conclusion.

Many books peter out 20 or 50 pages before the end. This one SEEMED to, but, in fact, does not. It climaxes at 80%, yes... but the anticlimax -- the final assault on the peak occurs on the final page. A work of genius, and a modernist book of great achievement.

Now I feel ready to begin the Snopes trilogy - a portion of which (The Long Hot Summer) I read twice on a long, hot, non-stop bus trip from New York to LA... close to 40 years ago.


I began reading fiction in 2011, after a... 30? year hiatus... and one of the principle reasons for taking it up again (apart from the fact that I had essentially finished what I had, for a long time, been doing) was that I regretted that I had never really read much Faulkner.

I began by reading the usual ones -- Sound/Fury & As I Lay Dying -- and, frankly, was disappointed.

Until I got to Absalom, Absalom!

It so captured me, that I read it in a rush -- and so now, planning to go and read some later Faulkner (the Snopes Trilogy). I've decided to start be rereading Absalom, Absalom!

My reading has gotten much, much better since then -- my speed has improved, certainly -- and I can now read in a week or two (depending on external forces) what took me a month or two to finish three years ago.

Of course, with term on -- there are a LOT of external forces... more than I can discuss in a polite forum... but so it goes...


[What can I say? The book feels like a masterpiece. That is, having read it..., I feel like I hardly know it.

LIght years beyond Sound & Fury and As I Lay Dying... there, I had the feeling that the story was often but a function of the language -- here - everything -- the brilliant language, the originality, the intensity, the intelligence, the *structure* of the plot... and its very amorphousness -- everything is subordinated to the central theme(s).]