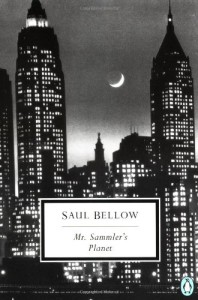 Sammler is an important book. Stylistically, it is rich, inventive, original, flawed (of course it is ‘flawed’, it is Bellow…!), full of heart, great lava flows of mood and motion…. Intellectually, it is original, often brilliant, insightful, reactionary, sad, tragic, revolutionary, hopeful.. it is Bellow… a novelist of ideas, as I tried to describe it in my review of Herzog.

But more importantly, Sammler is important because it is Bellow coming into his own. Augie is not Bellow. It was written by somebody else… Somebody in Iowa, maybe. Herzog is Bellow, but uncertain, very flawed (indeed), still immature… but it is New York, urban, late 20th century Bellow in embryo… Seize the Day is a flawless little gem…, but it is just an ‘exercise’, a novella, a conscious attempt by a writer to learn to write, to REALLY write, after all the pretentions of Augie and the missed opportunities of Herzog…. Sammler, by contrast, is Bellow in full Bloom!

It is a wonderful and exuberant book – a book in which absurdity and tragedy is transmuted into… what? Acceptance…? Certainly not into melodrama… and not into comedy… it is, after all…, Bellow.