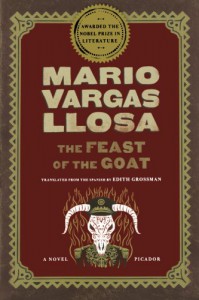 This magnificent little book is page-turner. It is a plot driven work that analyzes the rule and the assassination (and the consequences thereof) of Rafael Trujillo, the dictator of the Dominican Republic from 1930-1961. The book has an unlikely hero (to reveal the name here would constitute a ‘spoiler’) and, obviously, an anti-hero (Trujillo himself).

But the book is more than mere plot, for the plot functions as a vehicle for the analysis of a host of highly individuated characters – characters of great depth and intensity of feeling and of existential weight.

(Contrast Aristotle’s Poetics, for whom character [ethos – which refers to character TYPES, stock characters, not individuals in the modern sense] is a vehicle for the unfolding of plot [mythos]. In this very classic sense, Vargas Illosa’s work is ‘classically’ modern.)

But these characters are not there simply to function as pools of feeling or of self-absorption or of narcissism and the like – as is so often the case with modern literature. For the characters in this work function quite explicitly as a vehicle for the analysis and anatomy of the modern pathologies of fascism and of authoritarian societies. There is thus a social or historical dimension that is fundamental.

There is, however, readers should be warned, very little in the way of ‘lexis’ – that is, no fireworks of style or language -- which some readers may bemoan, but which all too often is but a camouflage for the absence of meaning. At any rate, that is not Vargas Illosa’s concern in The Feast of the Goat.