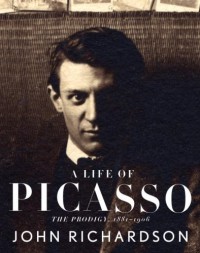 Let me try to be a bit more coherent.

First, there is a nice on-line collection of Picasso's complete works (and much, much more) at this site:
http://picasso.tamu.edu/

The first volume of this biography covers the years 1881-1906 (but really goes through 1907): Picasso's youth, his early years in Paris, Blue Period, Rose Period, the remarkable sojourn at Gósol -- his dealings with Apollinaire, Alfred Jarry (who Picasso actually did not ever meet), the Steins, Matisse -- and his passion (via Paco Durrio) for Gauguin and El Greco. These are the years of Fernande Olivier, his first mistress. The book, which runs to near 500 large, beautifully pages, must contain well over 2,000 photos -- mainly of Picasso's many drawing, paintings, sculptures, sketchbooks -- but also of the works of those who influenced him. The photographs are integrated into Richardson's text such that the book is, in effect, a prolonged meditation on the origins of Modern Art. One can "see", for example, through the juxtaposition of photographs, the influence of an El Greco or of a particular landscape on this or that work of Picasso's. It is thus a fabulous book -- at least for one, like myself, who knows so little about the topic.

There are times, as I said earlier, when Richardson seems to engage in the biographical fallacy. His discussion of "La Vie", for instance, focuses on Picasso's use of the head of Casagemas (the friend of Picasso's youth who committed suicide) in the final version, in place of his own (which had appeared in the earlier sketches) --- and gives an interpretation of a biographical interpretation of the picture which is clearly erroneous. In fact, the picture shows a woman in the four seasons of her life: Spring (on the left), Summer (w/ child, on the right); deep Autumn and t hen Winter (death) on the top and bottom -- in the manner (as Richardson does help to point out) of a Tarot reading. Richardson, I think, does not recognize that the same woman is depicted throughout. Likewise, in the Saltimbanques, he does not see that the four male figures groped on the left are really two -- Picasso in his maturity and in his youth (on the far right of this grouping), and a mature (and younger) el Tio Pepe (in the center). As with La Vie, one can see it in the eyes… Assuming this is correct, the girl with her back to the viewer (in the lefthand grouping) is presumably the Fernande of the portrait (on the far right) as a young girl. In all of this, one sees Picasso's growing obsession with death.


What I found most striking in all of these photos -- and what I had not understand about Picasso -- was that he was first and foremost a master of drawing -- a draughtsman -- and that everything else is secondary. In fact, in commenting on Matisse's remarkable La Bonheur de Vivre and the Fauve use of color -- Picasso says perceptively that he (Picasso) always used color as an additive -- that he began with drawings, and then added the color like salt into a soup…; but that Matisse began with color, that was in search of form ("I've mastered drawing and am looking for colour; you've mastered colour and are looking for drawing" (I.417).

The most serious drawback is that none of the prints in this volume are in color. I have purchased both a paperback AND a hardbound edition -- and neither have color. The hardbound edition of vol. III DOES have some color plates -- but for vols. I and II, the paperback is adequate.

Unfortunately, Richardson does not use the standard catalogue numbers, and so one must look them up simply by year. I have found one marvelous sketch in the book [1900:], from a private collection, which I cannot locate on the website: a self-portrait of Picasso in a raincoat, carrying easel and brushes, but looking like a gangster with a submachine gun…. and bearing the inscription "Paulus Ruiz Picasso Pictor en misere humane"

(In reading this book, the first thing I noticed were its flaws. In dealing with the painter's early life, I felt that there was a certain lack of depth and nuance...; the author seems often to be guilty of the biographical fallacy. But as I continued reading, I began to feel the power of the subject taking shape... and form... and to see the character of the painter deepening before my eyes.... as he matures.

More importantly..., the writing itself is in some respects almost secondary -- as the book is adorned, on every page -- with anywhere from 2 or 3 to 5 or 6 different plates, mostly (but not exclusively) of Picasso's. These plates are integrated into the text -- not simply tossed onto the pages as random 'daubs' -- so that the narrative and the artistic development grow and expand in a fascinatingly interconnected fashion....

I am learning much not only about Picasso and his art - but about fin-de-siecle Spain, the Paris of Apollinaire and Modigliani and Gertude Stein... about impressionism, expressionism, surrealism... and, of special interest to me, about the development and 'mentalité' of the WWI generation -- many of whom moved from the avant-garde to the political right (like Salmon, Max Jacobs) -- and only a relatively few of whom ended up as committed anti-fascists. Picasso was one of those few..., and what it is that inoculated him is quite curious, indeed.)
Tweet