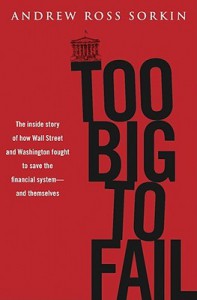 Finished -- I imagine this book would be a tough read, since it's pages literally crawl with minor characters -- bankers, minions of the armies of the night... but it makes a good listen -- Paulson comes off much better than Bernanke or Geithner -- and the author tries (against Taibi) to rehabilitate Goldman. He makes the case, persuasively, imo -- against the Vampire-Squid conspiracists -- that the media really didn't and doesn't understand how close Goldman itself came to failing (-- so much for the myth of the all-powerful Goldman). Had Morgan failed, Goldman would certainly have been next... (obviously, Citi would have gone... perhaps earlier...., but that wouldn't have been allowed to happen; and Citi, of course, had a different status from Goldman, being a bank).

The book is full of interesting anecdotes -- and offers a fairly convincing portrait of the the modern 21st century conditorii. It thus has sociological, as well as financial interest.

Now that I've learned to love and embrace drive-time, I'm going to try to finish Lords of Finance.

(My current audible (drive-time) -- really well told -- even has me feeling sympathy for Dick Fuld and Hank Paulson...)
Tweet