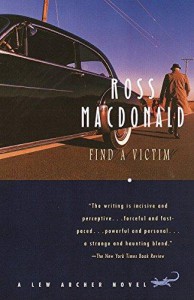 This short book is #5 -- I've resolved to try to read the series in order. Millar (Macdonald) himself said that Doomsters (#7) was his breakthrough book, so one more till I get there: http://www.goodreads.com/book/show/1329885.On_Crime_Writing

This book has some flaws, which led me for a while to toy with giving this three-stars. It's a bit melodramatic in the middle and those fight scenes are just corny. The writing doesn't have quite the sparkle of some of the earlier books - it's a touch flatter.

But the strengths are just as nagging -- a tightly, tightly wound and complicated and nuanced plot, characters who act realistically in utterly surprising situations, and have depth -- and a gem of an ending. And hovering over all of it, like an angel over the soiled drama that is man..., old Lew Archer.
Tweet