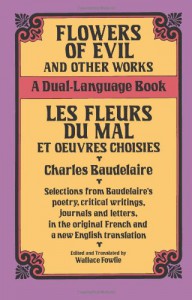 I finally finished Les Fleurs du Mal, which I read during the stray hours I had each week in between classes -- reading, that is, while colleagues and co-workers spent their valuable time scheming and scamming..., I suspect.... (Sic academia transit). Just kidding, of course. They are noble creatures....

Or so they insist...

At any rate, I read the poems in French, using the English as a crutch. This helped, since the vocabulary is a bit strange.

This volume fulfills its function beautifully, and that's what the five stars are for. I couldn't care less how one judges the quality of the "English" qua poetry -- The translations were calibrated perfectly to helping one go smoothly and accurately through the French. That's all that counts. So two-thumbs up for Wallace Fowlie.

Much of the poetry -- with a few exceptions -- left me cold -- so once again, my limitations, my lack of familiarity with Modernism, my lack of sympathy for Romanticism in general -- were on full display. There were a few, however, that I liked very much (as I noted in passing) -- and the last five really knocked me out, esp. La Malabaraise... for obvious reasons...., which I shall not expound upon here; Recueillement; Le Gouffre; and Les Plaintes d'un Icare.... Le Soleil moribond s'endormir sous une arche.... ahh....!

I will try to read some of the Poëmes en prose (Le Spleen -- since I've plenty of it these days.... for obvious reasons which...) before packing this in. It's very helpful to have read this, given my attempts to read myself back into the 20th..., well..., let's not go overboard.... let's start with "back into" the 19th century... But once the dual-language Rimbaud arrives, I'll slowly get started on that. I've also got a dual-language Mallarmé on the way, I think.

Obviously -- Baudelaire's message is pretty simple -- all this feeling, all this sensibility.... and then death. And he is not..., cannot be.... reconciled.
Tweet