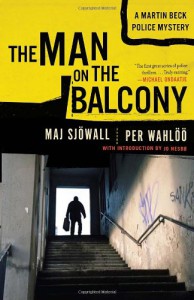 The problem with mysteries is that they are normally written in series, and one kinda has to start at the beginning..., not only because characters are introduced there, but because character development itself occurs more over the course of the series than over the course of the individual story. On the other hand, many of these writers take several books before they learn... *really* learn... to write. Even Ross Macdonald said that he didn't really break out until he had written the Doomsters -- which was his seventh Lew Archer book -- so one has to have some patience. If you give up with the first book of a series, you may be losing out on something fine. Of course, you don't know that until... until you know that - because sometimes the writers really do stink.

At any rate, readers who have judged Sjöwall and Wahlöö on the basis of Roseanna (which I almost did) will be making a big mistake. For here, with their 3rd book... even though the Man Who Went Up In Smoke is very good..., Sjöwall and Wahlöö have finally found their breakout book - this book is tender and rich and nuanced and quite a brilliant crime novel.
Tweet