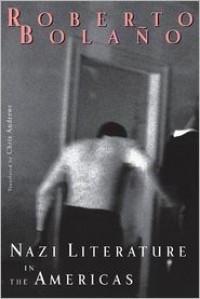 This book is not for everyone - it requires that you are already in on Bolaño's prosopographical (inside) jokes (if you are, much of this is hysterical); love his jungle of proper nouns - reminiscent of Whitman or Catullus, but lusher -- and have a serious interest in understanding the pathologies of fascism and Nazism. For what Bolaño offers here is nothing less than a filleting of the psychology/pathology of fascism -- on the premise that fascism is not a doctrine (not wholly true), but a mood, a sentiment, a virus... an "instinct in the soul" (Maurice Bardèche), this is precisely (one of) the right approach(es). Bolaño is one of the great anti-fascist writers of our times -- and serves to warn us, from his grave, of the dangers that the fascist international (always hiding under different names and different romances) poses in the coming century.

(For an example of what I mean by the 'lyrical' element in Nazism, see the appendices to this book - the two letters written by Cioran in the mid or early-30's that express his "love", admiration, and exaltation of Hitler: http://www.goodreads.com/book/show/3130560-searching-for-cioran -- a sentiment that proves to have been quite widespread in Romantic circles in Europe at this time. There are photos of Hitler entering Austria by car at the Anschluss, where the women lining the street are screaming orgasmically as if he were one of the Beatles on The Ed Sullivan Show.)

Finally, regarding the lyrical fascist aesthetic, here is Susan Sontag's 1974 NYRB article on "Fascinating Fascism" and Leni Riefenstahl, which makes many of the essential points, and is a must read: http://www.history.ucsb.edu/faculty/marcuse/classes/33d/33dTexts/SontagFascinFascism75.htm

And don't skip the Epilogue, with its lists of "Secondary Figures" and "Publishing Houses"... e.g.

Eugenio Entrescu. Bacau, Rumania, 1905 - Kishinev, Ukraine, 1944. Rumanian General. During the Second World War he distinguished himself in the capture of Odessa, the Siege of Sebastopol and the Battle of Stalingrad. Erect, his member was exactly twelve inches long, half an inch longer than that of Dan Carmine [see ad loc.]. He commanded the 20th Division, the 14th Division and the 3rd Infantry Corps. His soldiers crucified him in a village near Kishinev.

María Teresa Greco. New Jersey, 1936 - Orlando, 2004. Argentino Schiaffino's [see ad loc.] second wife. According to eye-witnesses she was tall, thin and bony, a sort of ghost or incarnation of the will.

The final chapter, "The Infamous Ramirez Hoffman" is the chapter that was expanded into Distant Star.

I agree w/ others (William) that this is not the book to start with, for Bolaño, and think that Distant Star and Last Evenings on Earth are the place to start. But for those with the strange and requisite interests, this book has much to offer.
Tweet