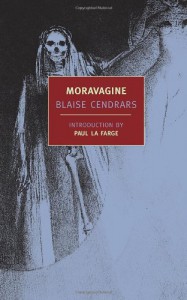 I couldn't decide whether to give this 3 stars or 4 stars (not that anyone would care either way). Cendrars seems to have hated this book..., having begun it in 1917, he was still trying to finish it as he crossed the Equator on a boat to Rio in 1924. He simply couldn't stand the "turgid, pretentious style" to which he had committed himself. I don't disagree.... It made him vomit, this book.... 3 stars..., bah!

The problem may, of course, rather be that I don't understand Surrealism. The extravagant expressions of a diseased or troubled or excessive mind -- it's all well and good. But as imaginings -- they don't have much meaning -- and so after awhile..., it's hard to tell one lunatic's ravings from another. And tedium sets in... But, of course, this is rather subjective.... so perhaps more reading of it will cure me of my limitations.

Cendrars loved this book. He conceived of it while talking to a diminutive Jew in a bar on the Boul' Mich' in 1912 -- The Jew's name was Starckmann. Moravigine then accompanied him, Cendrars, throughout his many travails for the next 10 years or more. The Jew admired Cendrars enormously; he was devoted. And when Cendrars joined the War, the Jew followed him. Cendrars lost his right arm. The Jew lost his life.

Cendrars seems to have been a man of excesses -- and yet capable of guilt. He knew everyone, but in his autobiography spoke mainly about all the nobodies he knew. In his "found documents", printed at the rear of this volume, he speaks about his deep friendship for Satie..., "dear Satie...." Here's how he sounds when he's not being turgid and pretentious....:

"Moravagine. I've tried several times to go back to it since giving it up in Nice. Today, if it's back on the table, it's because Cocteau set things in motion again - that's what I hear. Cocteau brings it up with Edmond Jaloux; Jaloux, who edits a collection of novels, mentions it to his publisher; he writes to me. I don't want to know about it. I don't know Jean Cocteau and I don't want to hear about Jaloux. So I'm hunted down -- by Paul Laffitte, by young people who come to my house to discuss the standards of high literature. (What a joke, they've never written a thing! maybe never a read a thing! but they're charming, well-dressed, likable; you'd think they were Cocteau's young nephews! and Jean, sprung from the loins of Catulle Mendès, is himself a great-nephew of Proust's!) Finally the publisher sends his delegate, Brun, the director of the house. Louis Brun, former surveillance photographer, delivers his pitch. He goes about it informally. He's on the level and above board in his business dealings, he says. He asks my price. I ask for a fat sum. He knocks it down by a fifth. We sign. He calls me 'tu'. We part good friends. We're thick as thieves...."

Ahh.... He must have been quite a character and a charming rogue, Cendrars. And I can see how Miller must have loved him and stole so much from him.... Definitely, 4 stars!
Tweet