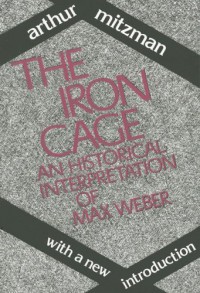 I don't usually read through books that I don't like very much. That's one reason, I suppose, why most of the books I manage to finish have five-stars. (Also..., I'm a notoriously easy grader -- preferring to be harder on myself than on others.)

And this one was no exception: a blend of the biography, intellectual history, and psychoanalysis of Max Weber -- I gave up at the midpoint.

Though I'm a great admirer of Freud (-- I spent a full year in college reading huge portions of the corpus, and with great attention --), I've never had any interest in Freudian interpretations of literary or historical figures. In fact, I take the position that Freud's own theory -- which insists that psychoanalysis can only really be conducted on a subject who is *present* in the flesh (-- since, after all, only the living subject can provide the therapists/interpreter with those associations of ideas that alone reveal the underlying aetiologies of our various behaviors, dreams, neuroses, or whatever…) -- precludes it.

Weber, of course, was a man of prodigious intellect; he had a excruciatingly difficult relationship with his overbearing and authoritarian (Bismarckian) father; he had a violent fight with his father in 1894, whereupon, seven weeks later, the old man died (from an ulcer, apparently). Weber suffered enormous guilt. And for five years, he suffered from such a sever depression that he could not work, and he could not return to teaching for another 20 years -- until shortly before his own death.

Given this, it may be granted that an attempt at psychoanalyzing Weber (and his work) is not wholly illegitimate. In fact, Mitzman finds plenty of instances where Weberian theories seem plausibly to reflect a repressed struggle with authority….

But alas, it is only 'plausible'. And even if one DID thereby find the source and aetiology of Weber's doctrines, one would STILL learn almost nothing about the structure of those doctrines in themselves -- for genetic interpretations of philosophy almost always prove themselves to be quite useless.

Anyway…, some interesting material here; an intelligent author, for sure; a dubious method. Certainly not the "intellectual biography" I was looking for.