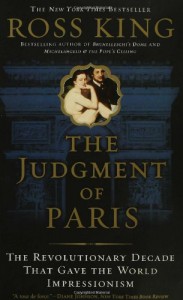 (It has taken me quite a while to write this review -- I wasn't sure why…. I thought maybe I was just being busy, or just being lazy…; but I think the reason is deeper than that.... Anyway, this is what I originally wrote, and didn't post, when I finished the book:)

This was the perfect book for me. I knew just enough to profit from this informed and intelligent review of the roots of Impressionism and this fascinating history of the Second Empire… the Franco-Prussian War, the Siege of Paris, the Commune (and its aftermath), but not enough to be troubled by the limitations inherent in what is (I assume) merely a book for the general reader. I've learned an enormous amount about the history of 19th century French painting, however -- and recommend the book highly. It's a great read.

There are some nuances and complexities, however....

I had expected this to be a book written in celebration of Manet -- though, in truth, King does not (as I read it, at least) have all that high an opinion of Manet as an artist. In fact, throughout much of the book, it is Ernest Messonier -- who starts out simply as a foil for Manet -- who appears to be the hero. But by the end…, the catastrophe of Messonier's "Friedland", the painting so perfect in every minute detail -- the painting which took 10 years to paint -- was yet a total failure…, PRECISELY because with his preoccupation with the parts..., he couldn't capture the sense of motion in the whole. In point of fact..., King's book is in many ways less about the birth of the new, of the 'modern', of Impressionism, than it is "an elegy for a lost empire and a testimonial to [the] fugitive and meretricious grandeur" of the Second Empire….

(But this is what I think I should have written instead....)

This is not a book about Impressionism, but about the Second Empire and about the death of French Academic art and, indeed, of an entire way of life…

The period of Louis Napoleon is key to an understanding the roots and structure of 'modernity'. Napoleon III was the first modern authoritarian -- he ruled by cooption and Spectacle, rather than by force… In that sense, Marx was absolutely right to focus on him (The 18th Brumaire)…, and to see in him the initial note and prelude to what later we would call fascist authoritarianism… (or, at least, one aspect of fascism)…. Indeed, Sedan (and its aftermath) was perhaps the first truly "modern" catastrophe… afterwards…, nothing has quite been the same..., has it? One might say that the Second Empire, meretricious though it was, was the final dance of that aging debutante known as l'ancien regime…

Well… that's not quite right either -- so I give up. At any rate, this book got me thinking, that's for sure.