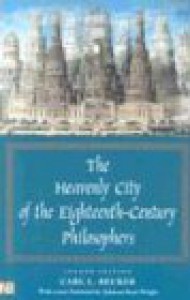 Just gave this a cursory read - it is not interesting (to me). Better accounts of the thought of the period in Bury's The Idea of Progress and such books.

Becker's view that "climate of opinion" plays such a dominating role is doubtful - it may *seem* to be what makes Dante or Thomas nearly unreadable (-- though they are not, in fact, unreadable when one reads them slowly....); but then, if that were so, one couldn't explain the utter clarity one gets from reading Plato -- where there is no obscuring "climate of opinion" to blame for one's incomprehension. The problem with Thomas and Dante is simply that their presuppositions -- which *can* be grasped and rationally apprehended, if one has the requisite philosophical background - are unfamiliar to the modern reader. But so what...?

The broader implication -- though I didn't read the volume closely enough to be sure that the author actually does draw it - viz., that 18th cen. rationalism is ultimately a matter of faith - is either false or trite. It is trite, if it means to suggest that rationalism rests on unproven metaphysical assumptions. Of course, it does! The foundations of rationalism in Plato, for example, are the Ideas -- which Plato states *repeatedly* are merely hypotheses (-- just as the Categories of Kant are themselves merely hypothesized; that is, there is no deduction of them). In fact, it is *precisely* in this context of discussing the theory of Ideas that Plato develops the so-called 'hypothetical method' in the Meno, the Phaedo, and in Republic. If on the other hand, the claim is that rationalism has no rational basis -- that it is pari passu the same as Christian Faith -- then this statement is, imo, simply nonsense.