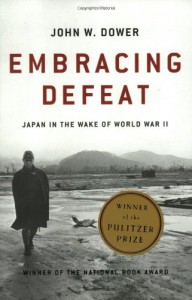 I posted some comments under updates (http://www.goodreads.com/review/show/124351350),
and so will not add a special review here. Suffice it to say, this is a book of real depth and intelligence, and is fully deserving of the many awards and prizes it won. Anyone who's interested in Japan (that's you, Jimmy...lol), or in the turns and events of the Postwar period, will gain immeasurably from reading this volume. One point that came through loud and clear is the degree to which the U.S., and its ideals, were distorted by the Cold War. Dower describes how in 1952-1953, panicked by events in Korea, Dulles and his Administration pushed to rearm Japan -- just seven years after the end of WWII - and how it was the Japanese, and the conservatives in power there at the time, who stopped it. The height of folly and irresponsibility -- traits that have dogged Republican administrations and Congresses since the death of FDR.
Tweet