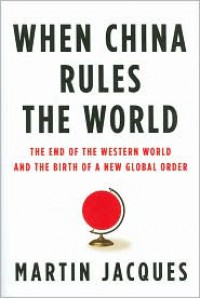 After a long hiatus I've gone back to finish this. It is, in my opinion, one of the most important books written on the topic in many years -- insightful, intelligent, never dogmatic, informed by a true historical vision -- it is a book that I think will long outlast its critics... of which there seem to be quite a few.

I have read some of the reviews of this book -- not all, of course -- and have to say that I have rarely seen so many understand so little. For the most part, they seem to have simply scanned the opening and closing chapters, and measured Jacques' (in reality, always measured) conclusions... against their own (self-inflated) opinions.... rather than working through the book, and engaging with the author's thought on a point-by-point basis.

This does not mean I agree with everything in this volume. He has not captured the problem of Taiwan correctly, imo -- since he does not seem to realize that Taiwanese opinion is divided along *ethnic* lines -- and what this implies. He is also too ready to adopt the Pomeranz view of the Great Divergence - viz., that it was a recent phenomenon.

But these are quibbles. The fundamental theses: that China is a civilization-state, and not a nation-state; that it is driven by Neoconfucian (rather than western values); that all these traits -- including the old tributary system -- will likely re-emerge in time -- given the conservatism of culture (see below) -- the difference between a shame-culture and a guilt-culture and the importance of this distinction to understanding China and the West -- all seem to me to be unassailable.

On the conservatism of culture -- let me just cite two of my favorite examples.

The system of land-tenure in play in Ancient Egypt under the Pharaohs not only survived the fall of the Pharaonate, but -- with only a change of nomenclature (from Egyptian to Greek to Arabic) was continued INTACT under the Ptolemies, during the Byzantine period, and under the Arabs... until fairly recent times.

Another one: the ancient military youth groups (based on kinship lines) in the Iberian peninsula were likewise retained INTACT by the Romans, after their difficult (and never completed) conquest of Iberia -- again, with only a change in name -- and survived in this form for centuries (see Rostovtzev's Social and Economic History of the Roman Empire -- another classic....)

The Hagia Sophia was built on the site of an ancient temple (I believe it was a temple of Aphrodite, but I do not remember exactly) and then -- after the Turks took Constantinople -- and changed its name to Istanbul, the cross was removed, a minaret put in its place..., whereupon it became the Ayasofya Mosque.

Thus, just as one can trace physical ruins through time such that culture after culture builds on the same physical spot and (often) on the very same physical foundations -- so too, with cultural institutions..., we often find that institutions survive intact for centuries from culture to culture, suffering only a change in name.

Freud, by the way, uses a similar image to describe the fundamental problems of ego psychology -- and of the compulsion to repeat -- but that is another story altogether....