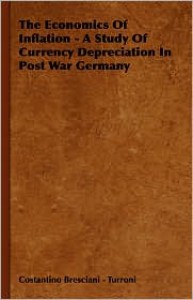 The book is highly technical -- and I doubt I need to read more of it at this state, so I've moved it into the read column, The basic premises are fairly set out at the outset.


(as an addendum, I should add the following: B.-T. shows that the deficit, which began during the war, led to the printing of money which led to the depreciation. The growth of notes in circulation preceded the rise in prices by some period of time -- and there were fits and starts and stages in the process during which now circulation increased, now prices increased, or during which external and internal prices rose at very different rates. Those who few reparations as the cause of the inflation, by contrast, have always argued that it was the need to pay the Allied demands, which had to be met either in Gold or by forex, that forced Germany to print huge stores of mark notes -- and which thereby led to the depreciation. This claim is, as I note below, demonstrably false.)


Dense, learned, serious, intelligent -- utterly clear for those who have sufficient depth of understanding regarding monetary mechanisms and financial markets -- this book (highly recommended by Marc Faber) offers the definitive refutation of the myth that hyperinflation in Weimar was the result of Versailles and Reparations. This claim about Versailles and reparations, hysterically proclaimed by the Germans even before the ink was dry -- and by German and Nazi apologists ever since -- is here exploded.

Bresciani-Turroni, an Italian who worked on various economic/inflation boards during the period in question, and who thereby had a first-hand as well as an academic knowledge of the issues in play, shows that the depreciation of the mark was a result of the collapse in the current account (that is, a budget deficit) which went negative during the War -- when Germany embarked on an unprovoked campaign for world domination which they could not pay for, financed with debt -- which eventually had to be monitized when there were no longer international buyers to be found for it -- but which they themselves believed and planned to fund by raping the occupation territories in the West and especially in the East -- the early version of Lebensraum.

Moreover, as Bresciani-Turroni demonstrates, it was the Right in Germany -- and the Nationalists -- who prevented the Govt. from balancing its books by opposing EVERY scheme to raise revenue through taxation (which obviously would hit the wealthy).

For more about this issue, including a fascinating account of how Versailles failed precisely because it was too MILD -- see the remarkable and brilliant discussion in MacGregor Knox, To the Threshold of Power, 1922/33, vol. I, pp. 235-243... a truly stunning chapter.

As we move into the Great Inflation of the 21st Century... one will hear a lot about Weimar, reparations -- the poor Germans who were beaten down by British and 'international' 'banker' interests (n.b. the code words...), and Bresciani-Turroni's classic study of the inflation in 1914-1923 will be the perfect answer to them..., if only people will read it....

For those not quite up to the challenge of reading a book of THIS sort, I recommend reading Faber's Tomorow's Gold and David Hackett Fischer's The Great Wave -- both of which are important, deeply informed, fascinating, compulsively readable (imo), and sound...