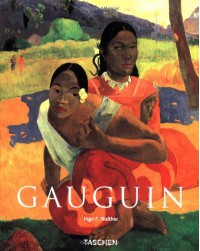 This is, as I've implied, a very neurotic book -- but by the end, the author (for all his idiosyncrasies) won me over. It is the late Gauguin that accomplished this.

Gauguin first trip to Tahiti (the source of his most famous pictures) was in 1891-1893. He returned to Tahiti in 1895 after a disastrous interlude in Paris, during which he further broke relations with his wife, Mette, found his work mocked, abandoned by friends -- and during which he also contracted the syphilis that ultimately killed him (1903). It is on his return, however, that his most achingly beautiful work was produced.... and this is something I had never understood. In view of my earlier comments (below), consider this picture of his mistress and newborn son (his 7th). Both mother and child are crowned with a halo. the woman holding the child is supposed to be a nurse -- but she resembles the famous death head of an earlier portrait...., only facing left this time, instead of right.


At any rate, here are some of the pictures from that last period....

The Call. 1902. Oil on canvas. Cleveland Museum of Art
(The woman in the center, with the bonnet, is presumably syphlitic, and is probably one of the women whom Gauguin infected. These bonnets are known from the paintings of Picasso and others at the Asylum of Saint-Lazare.

Girl with a Fan. 1902. Oil on canvas. Folkwang Museum, Essen

I am reading this book with great interest. The prints are very well done and the text and prints are presented in an integrated fashion so that one doesn't have to flip back and forth between picture and study. But the author, who is intelligent and informed, apparently despise the painter -- though he appreciates his art. He has a low opinion of Gauguin's character, thinks his flight into primitivism was delusional and hypocritical and inauthentic -- and does not hide his mocking tone. It's both refreshing and disorienting -- refreshing, because I hate nothing more than the hagiography that infects so many biographies; and disorienting, because his attacks on Gauguin (who did, of course, abandon his wife and five children) are -- on the artistic side, at least, not very persuasive.

I'm no great fan of the Symbolists -- but to reduce Verlaine and Mallarmé to nothing more than 'strutting dandies' is a bit facile.

Here is Ingo Walther
(http://www.taschen.com/pages/en/catalogue/art/reading_room/178.in_memory_of_ingo_f_walther.1.htm). The book has been translated from German, and the translation itself is a bit stilted.


This is the painting (which is absolutely gorgeous) that Walther thinks is fraudulent and hypocritical -- because it assimilates the natives to christianity and is thus implicitly colonizing....


Such a claim, it seems, is preposterous....

.... before we write-off the author of this little volume too quickly, compare the following picture (Les Parau Parau, 1891), where the women sit in a 'European' style and (apart from the one on the right, at least) with 'European' gestures.... with any of the well-known 'picnic' scenes of the Impressionists..., such as Manet's

Maybe Walther is less of a loon than I think....